A common thread in many anti-immigrant arguments is that immigrants today, especially Spanish speaking ones, refuse to assimilate–in particular, that they refuse to learn English like earlier immigrants did.

Well, there is reason to reject that particular claim.   The figure below compares the rate by which immigrants in two key periods–1900-1920 and 1980-2000–learned English. 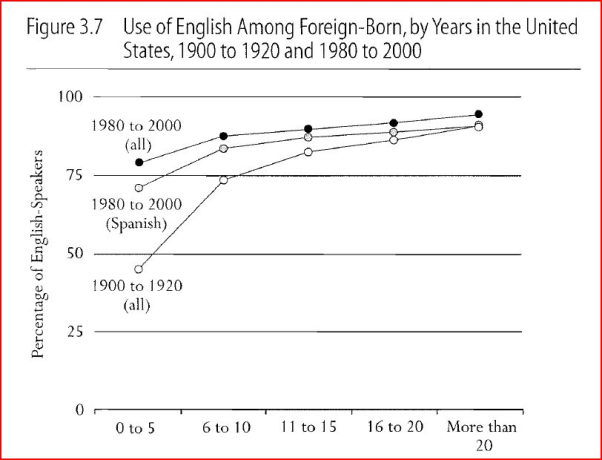 Quoting from the blog Sociological Images:

The bottom line [of the above figure] represents the percentage of English-speakers among the wave of immigrants counted in the 1900, 1910, and 1920 census. It shows that less than half of those who had been in the country five years or less could speak English. This jumped to almost 75% by the time they were here six to ten years and the numbers keep rising slowly after that.

Fast forward 80 years. Immigrants counted in the 1980, 1990, and 2000 Census (the top line) outpaced earlier immigrants by more than 25 percentage points. Among those who have just arrived, almost as many can speak English as earlier immigrants who’d been here between 11 and 15 years.

If you look just at Spanish speakers (the middle line), you’ll see that the numbers are slightly lower than all recent immigrants, but still significantly better than the previous wave. Remember that some of the other immigrants are coming from English-speaking countries.