Over 3000 participants from 183 countries are attending a two week UN sponsored climate gathering in Bonn, Germany.  The talks are supposed to help prepare the agenda for COP 17, or as it is more formally known, the 17th Conference of the Parties of the United Nations Framework Convention on Climate Change (defenders of the environment have renamed the meeting the Conference of Polluters) which will take place November 28 to December 9, 2011 in Durban, South Africa.

The cost of climate inaction grows worse.  As the Earth Island Journal reports:

Last week, the International Energy Agency announced that emissions continue to increase unabated. Emissions released in 2010 were the highest in history, despite the economic recession. The report stated that the “prospect of limiting the global increase in temperature to 2 degrees Celsius is getting bleaker.”

The National Oceanic and Atmospheric Administration (NOAA) announced that the level of CO2 emissions released in May 2010 set another record high.

The COP meetings have three main goals, all of which remain far from satisfied:

• determine how to measure, report and verify emission reductions

The Kyoto Protocol is the only international treaty that has binding targets for reducing emissions.  It was adopted on December 11, 1997 and entered into force on February 16, 2005.  The implementation rules were adopted at COP 7, which was held in Marrakesh in 2001. The Protocol targets are only binding on developed countries (Annex I countries); there are no binding targets for developing countries.  The Annex I countries agreed to reduce their collective production of greenhouse gas emissions by 5.2% relative to the 1990 level over the period 2008 to 2012; their commitments are listed in the Protocol’s Annex B.

Unfortunately, the Protocol does not include any mechanism for enforcing national action, which is one reason that overall emissions continue to grow.  Another reason is that some important polluters, like the United States, never signed the Kyoto treaty.

If no action is taken at COP 17, the Kyoto Protocol will expire.  Most developed countries appear content to let this happen.  At COP 15, held in Copenhagen, the United States led the charge for replacing the Protocol with a less binding agreement, one that included no specific emission reduction targets.  No progress was made at COP 16, which was held last year in Cancun.

Most third world countries–including the G77, Alliance of Small Islands States (AOSIS), the Least Developed Countries, the Africa Group, and ALBA–support a second renewal period as a step toward a strengthened treaty, one with enforceable national targets and a commitment by developed countries to pay climate reparations to those third world countries suffering the consequences of climate change.

One argument made by the United States and other developed countries against a renewal of Kyoto is that the Protocol does not including binding targets on the third world, and third world countries like China and India are themselves now major producers of greenhouse gasses.

We find that the emissions from the production of traded goods and services have increased from 4.3 gigatonnes [Gt] CO2 in 1990 (20% of global emissions) to 7.8 Gt CO2 in 2008 (26%). Most developed countries have increased their consumption-based emissions faster than their territorial emissions, and non-energy-intensive manufacturing had a key role in the emission transfers. The net emission transfers via international trade from developing to developed countries increased from 0.4 Gt CO2 in 1990 to 1.6 Gt CO2 in 2008, which exceeds the Kyoto Protocol emission reductions.

Our results indicate that international trade is a significant factor in explaining the change in emissions in many countries, from both a production and consumption perspective. We suggest that countries monitor emission transfers via international trade, in addition to territorial emissions, to ensure progress toward stabilization of global greenhouse gas emissions.

The figure below, which comes from their study, compares the rate of growth in a number of variables.  It shows that “emissions embodied in trade,” which are emissions generated by the production of exports, has grown faster than population, GDP, and global CO2 emissions.  It also shows that the growth in “net emission transfers Annex B to non-Annex B,” which are emissions contained in exports produced in developing countries but consumed by or used in developed countries, has outstripped all the variables, even the growth in international trade. 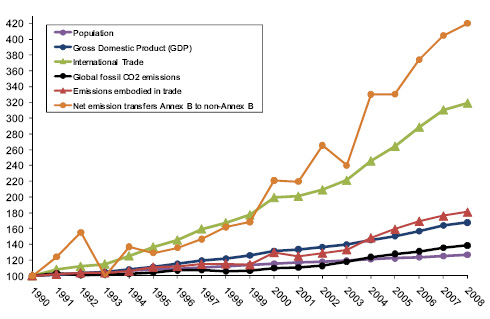 Their study also included the following figure which shows the net change in territorial emissions over the period 1990 to 2008 along with the change in the net emission transfer between each country and developing countries.   The small orange star represents pledged emission reduction commitments.

If we consider only territorial emissions, Europe actually came close to meeting its target reductions.  However, if we take into account the net emission transfers that come from consuming exports produced in the third world, Europe actually increased its emissions.  U.S. emissions grew territorially and again because of net emission transfers.  Looking at Annex B countries as a whole, we can see the important role that China plays as a producer and exporter of manufactured goods to the developed world. 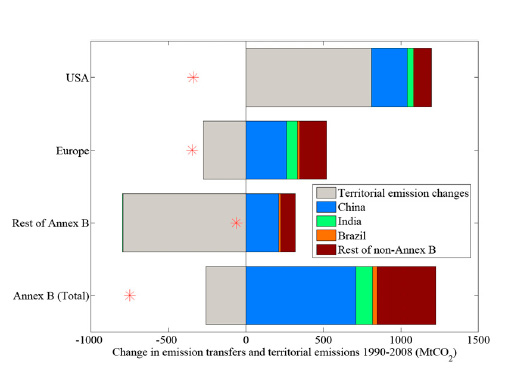 The authors of the study conclude by noting that their work shows that “a significant and growing share of global emissions are from the production of internationally traded goods and services.”  This means that emission reduction cannot fairly or productively be approached solely through the use of territorial mandates.  We need to recognize that progress in achieving environmentally sustainable economic relations will require national changes that also confront and transform contemporary capitalist globalization dynamics.