Considering the enormous time spent debating tax policy, it is easy to imagine that the U.S. must have one of the high tax rates in the world.  Well, that is not the case.

The Atlantic has a great blog post which includes graphs from a Business Insider blog post that are drawn from a KPMG report on global tax rates. 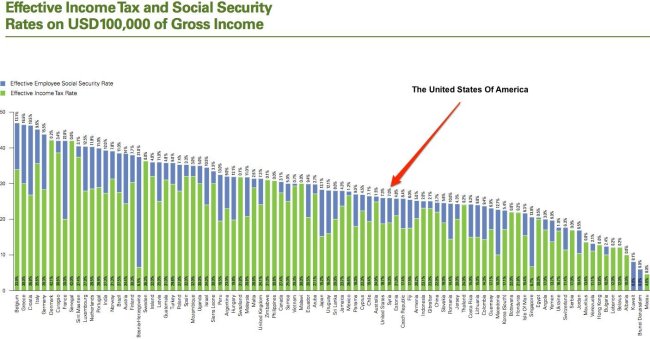 The next graph shows the same thing but for those earning the equivalent of $300,000 a year.  The U.S. ranking is similar for this upper income group, 53rd highest out of 114.

Moreover, as Derek Thompson, the author of the Atlantic post, notes:

But these numbers might understate how low taxes have been in the U.S. Unlike most advanced economies, the U.S. don’t supplement personal income taxes with a national sales tax, or value-added tax (VAT). Consumption taxes accounted for about a fifth of total U.S. revenue in 2008 (mostly at the state and local level) compared to an OECD average of 32 percent. In other words, the U.S. relies uniquely on personal tax rates to raise revenue — and we have relatively low personal tax rates.

Finally, here is a look at the U.S. ranking among OECD countries for taxes as a share of GDP in 2008.

So, given that the U.S. doesn’t seem to be a high-tax rate country, why is tax policy so contentious?  No doubt the answer has a lot to do with who actually pays the taxes and, perhaps even more importantly, what the revenue is used for.