As the following chart from the Financial Times shows, public sector gross capital investment–which includes government spending on infrastructure, scientific research, education, and other long-term priorities–is now at its lowest level since 1950 as a percent of GDP.

Perhaps even more worrying, net government investment, which takes depreciation into account, is heading towards zero. 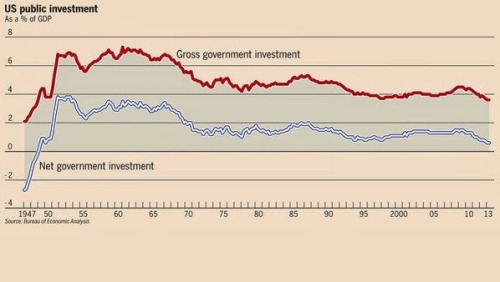 Removing spending on defense from the total leaves an even more depressing picture. The Financial Times evaluated all the major budget proposals currently being considered by Congress, and finds, as illustrated in the next chart, that all of them involve significant reductions in non-defense public investment over the next decade. 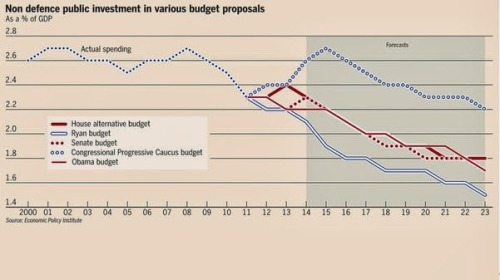 Slashing public investment is not the way to a healthy economy.

The Wall Street Journal had an interesting article about income inequality.

What follows is a chart from the article which shows that average income for the bottom 90% of families actually fell by over 10% from 2002-2012 while the average income for families in all the top income groups grew.  The top 0.01% of families actually saw their average yearly income grow from a bit over $12 million to over $21 million over the same period.  And that is adjusted for inflation and without including capital gains. 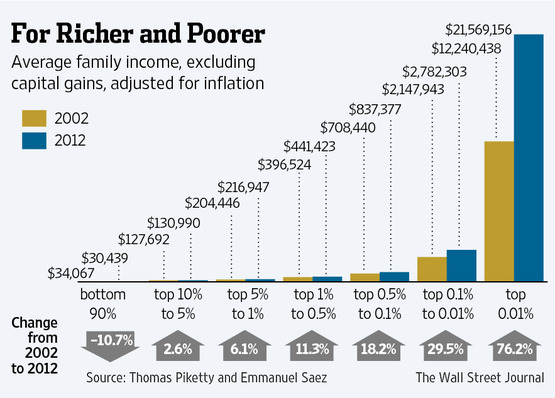 What was most interesting about the article was its discussion of the dangers of this trend and the costs of reversing it.  In brief, the article noted that many financial analysts now worry that inequality has gotten big enough to threaten the future economic and political stability of the country.  At the same time, it also pointed out that doing anything about it will likely threaten profits.  As the article notes:

But if inequality has risen to a point in which investors need to be worried, any reversal might also hurt.

One reason U.S. corporate profit margins are at records is the share of revenue going to wages is so low. Another is companies are paying a smaller share of profits on taxes. An economy where income and wealth disparities are smaller might be healthier. It would also leave less money flowing to the bottom line, something that will grab fund managers’ attention.

Any bets how those in the financial community will evaluate future policy choices?

The current economic recovery officially began June 2009 and is one of the weakest in the post-World War II period by almost every indicator except growth in profits.

One reason it has offered working people so little is the contraction of government spending and employment.  This may sound strange given the steady drumbeat of articles and speeches demanding a further retrenchment of government involvement in the economy, but the fact is that this drumbeat is masking the reality of the situation.

The figure below shows the growth in real spending by federal, state and local governments in the years before and after recessions.  The black line shows the average change in public spending over the six business cycles between 1948 and 1980.  Each blue line shows government spending for a different recent business cycle and the red line does the same for our current cycle.  As you can see, this expansionary period stands out for having the slowest growth in public spending.  In fact, in contrast to other recovery periods, public spending is actually declining. 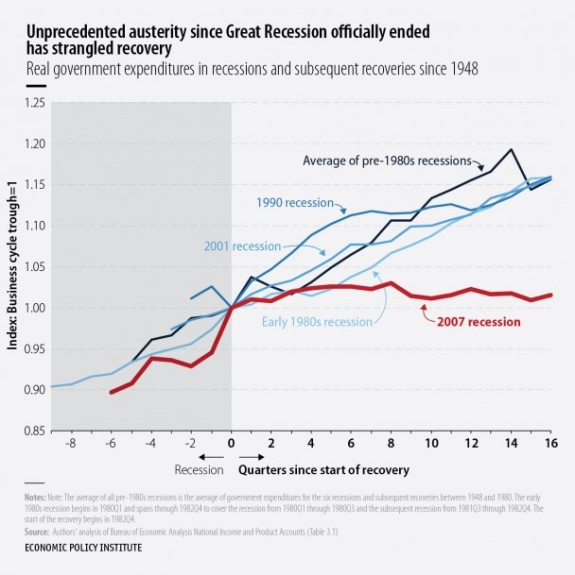 According to Josh Bivens:

public spending following the Great Recession is the slowest on record, and as of the second quarter of 2013 stood roughly 15 percent below what it would have been had it simply matched historical averages. . . . if public spending since 2009 had matched typical business cycles, this spending would be roughly $550 billion higher today, and more than 5 million additional people would have jobs (and most of these would be in the private sector).

The basic stagnation in government spending has actually translated into a significant contraction in public employment.  The figure below highlights just how serious the trend is by comparing public sector job growth in the current recovery to the three prior recovery periods. 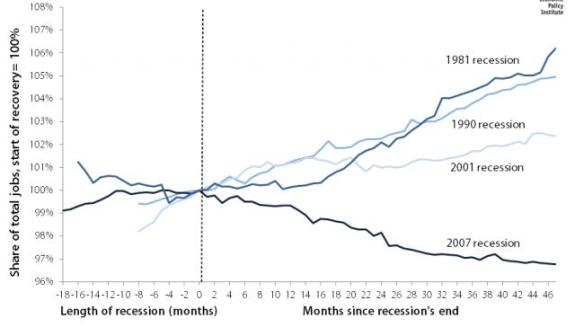 the public sector has shed 737,000 jobs since June 2009. However, this raw job-loss figure radically understates the drag of public-sector employment relative to how this sector has normally performed during economic recoveries . . . . (P)ublic-sector employment should naturally grow as the overall population grows. Between 1989 and 2007, for example, the ratio of public employment to overall population was remarkably stable at roughly 7.3 public sector workers for each 100 members of the population. Today’s ratio is 6.9, and if it stood at the historic average of 7.3 instead, we would have 1.3 million more public sector jobs today.

In short, the challenge we face is not deciding between alternative ways to further shrink the public sector but rather of designing and building support for well financed public programs to restructure our economy and generate living wage jobs.