Officially, the U.S. economy has been in expansion since June 2009.  Many people find this hard to believe. One reason is that wages have either been flat or falling for much of the period.

A recent study of real hourly wage trends over the period 2007 to 2014 by the Economic Policy Institute (EPI) documents this reality. The 2007 period marks the end of the previous expansion; the recession started in December 2007.  The charts below highlight the results of their study.

This first chart shows that only those in the top wage percentile have enjoyed an increase in real hourly wages since 2007.  Moreover, almost all groups are currently experiencing real declines in earnings. The exception is the bottom percentile and, according to the EPI, “a series of state-level minimum wage increases” is the main reason for their recent gains. 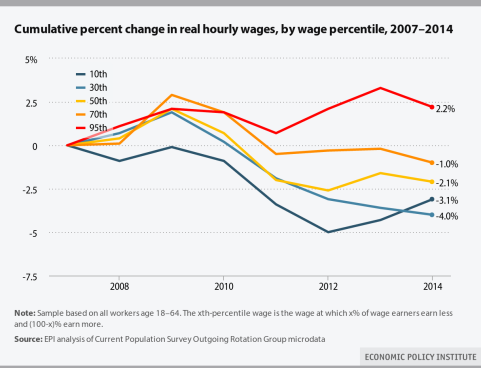 The following two charts separate the labor force by gender.  Again, we see gains only for the top percentile.  Men have experienced steeper declines in hourly earnings than women, although male wages remain higher than female wages.

The last chart looks at real wage trends by education.

As the EPI study explains:

It is clear that those in every education category experienced falling or stagnant wages since 2007. In fact, real hourly wages have declined for 90 percent of the workforce with four-year college degrees since 2007 (not shown). From 2000 to 2014, real wages of the 90th percentile of this group only increased 4.0 percent cumulatively.

The data do show that college graduates have fared slightly better than high school graduates since 2007. This is not because of spectacular gains in the wages of college graduates, but because college-graduate wages fell more slowly than the wages of high school graduates. Notably, despite wage declines in both 2013 and 2014, those with advanced degrees are the only ones who have returned to their 2007 real wage levels.

These trends only highlight the mean spirited nature of current attacks on unions and resistance to raising minimum wages.