Economic trends do not look promising, at least for working people.

The UN publication World Economic Situation and Prospects 2016 highlights the dramatic slowdown in economic activity in the years following the world recession.

Looking at the 20 leading developed economies we see that average growth fell from 2.8 percent over the period 3rd quarter 2002 to 4th quarter 2007 to 1.3 percent over the period 1st quarter 2010 to 2nd quarter 2015.  At the same time, growth became more unstable as shown by the rise in volatility. Consumption growth and investment growth also fell dramatically with volatility increasing. Trends were similar, although not as drastic for the 20 leading developing nations.

The UN study paid careful attention to the collapse in investment.  The authors note:

The global financial crisis has had the most pronounced negative effect on investment rates. . . . After an early recovery in 2010-2011, the growth rates of fixed capital formation have sharply slowed down since 2012, exerting downward pressure on productivity, employment and growth. The growth rates of fixed capital formation nearly collapsed since 2014, registering negative quarterly growth in as many as 9 large developed and developing countries and economies in transition. . . .

Investment in productive capital has been even weaker than the total investment figures suggest, as dwelling and intangible assets account for the majority of investment in developed economies. According to OECD data on fixed capital formation, investments in intangible and intellectual property assets together represent the largest share of fixed capital formation in a number of developed economies in 2014, including in Germany (47.2 per cent) and the United States (42.3 per cent). Acquisition of intangible assets, such as trademarks, copyrights and patents, may increase financial returns to firms without necessarily increasing labor productivity or productive capacity.

Especially noteworthy is that despite their lack of investment in plant and equipment, non-financial corporations have resumed their borrowing.  As the authors of the UN study explain:

A growing disconnect between finance and real sector activities is evident in the data: fixed investment growth nearly collapsed, while debt securities (a financial instrument to raise capital) issued by non-financial corporations increased by more than 55 per cent between 2008 and 2014, representing a nearly 8 per cent increase per year [as the table below shows].

This is noteworthy because it means firms are largely going into debt to engage in mergers and acquisitions, stock repurchases and dividend payments. If world economic growth continues to slide, many of these firms are likely to find themselves in serious debt difficulties. 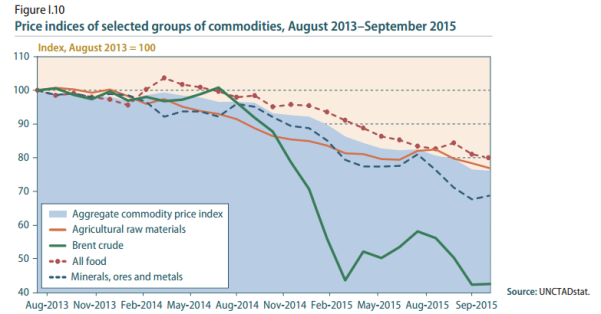 The slowdown in third world growth is gathering speed.  One factor is the growing capital flight from the third world.  As the economists Joseph Stiglitz and Hamid Rashid explain:

The real worry, however, is not just falling commodity prices, but also massive capital outflows. During 2009-2014, developing countries collectively received a net capital inflow of $2.2 trillion, partly owing to quantitative easing in advanced economies, which pushed interest rates there to near zero.

The search for higher yields drove investors and speculators to developing countries, where the inflows increased leverage, propped up equity prices, and in some cases supported a commodity price boom. Market capitalization in the Mumbai, Johannesburg, São Paulo, and Shanghai stock exchanges, for example, nearly tripled in the years following the financial crisis. Equity markets in other developing countries also witnessed similar dramatic increases during this period.

But the capital flows are now reversing, turning negative for the first time since 2006, with net outflows from developing countries in 2015 exceeding $600 billion – more than one-quarter of the inflows they received during the previous six years. The largest outflows have been through banking channels, with international banks reducing their gross credit exposures to developing countries by more than $800 billion in 2015. Capital outflows of this magnitude are likely to have myriad effects: drying up liquidity, increasing the costs of borrowing and debt service, weakening currencies, depleting reserves, and leading to decreases in equity and other asset prices. There will be large knock-on effects on the real economy, including severe damage to developing countries’ growth prospects.

This is not the first time that developing countries have faced the challenges of managing pro-cyclical hot capital, but the magnitudes this time are overwhelming. During the Asian financial crisis, net outflows from the East Asian economies were only $12 billion in 1997.

The US financial sector is one of the main beneficiaries of this capital flight.  However, the inflow of funds tends to drive up the value of the dollar to the detriment of US manufacturing, investment, and employment.

It is hard to see positive signs for the world economy.  In fact, many analysts are now predicting recession for the US.  The economist Michael Roberts has long argued that key to “the health of a modern capitalist economy is . . . the direction of average profitability of capital, total business profits and its impact on business investment.” In other words, a decline in profit rates will eventually lead to a fall in total corporate profits and then investment.  When that happens a recession is not far behind.

[R]ecently some mainstream economists have paid the movement in profits a bit more attention. . . . And . . . the economists at the investment bank JP Morgan have started to use profits and profitability as a guide to the likelihood of an oncoming recession.

They first noted that global profit margins have been drifting lower for the past two years, mainly driven by a falling profitability in emerging capitalist economies as the great commodity price boom reversed and China’s economy slowed sharply.

And now “DM (developed market) margins have begun to fall as US corporations come under pressure from the rising dollar and the concentrated hit to the energy sector,” JPM noted.  In another note, JPM economists looked at overall US corporate profits and calculated that “corporate profits were likely down 11% annualized last quarter, and down 7% over year-ago levels.”

They “now put the probability of a recession starting within three years at a startling 92%, and the probability within two years at 67%”. However, they temper this result by pointing out that profit margins are still historically high so there is room for a fall without economic contraction and also the expectation that the US Fed will not continue with its rate hikes as quickly or as far as previously planned. On that basis, their forecast of a US recession is “beginning within three years at about 2/3 and within two years at close to 1/2″.

It is difficult to predict economic turning points, but the trends appear clear—the long post-crisis expansion is nearing its end.  Tragically, few people have benefited from the expansion and our social structures are far from sufficient to see us through the new approaching recession.