The media generally talk about the economy in national terms—as if economic trends affect us all equally and we all share a common interest in supporting or opposing the same economic policies.  This comforting view tends to promote political passivity–since we are all in the same “boat,” it makes sense to leave policy making to the experts.

A recently published study on income distribution by economists Anthony Atkinson, Thomas Piketty and Emmanuel Saez stands as a welcome corrective.  Uwe E. Reinhardt discusses some of the main implications of their work in his New York Times blog.

Reinhardt’s Figure 1 shows average annual income growth for households in the United States and the different experiences of the top 1% and the bottom 99%.  From 1976 to 2007, average household income grew at an average annual rate of 1.2%.  Over the same period, the top 1% of households experienced an average annual income gain of 4.4% while the bottom 99% of households gained only 0.6% a year.  Household income gains were higher in both subperiods (1993-2000 and 2002-2007), in large part because these subperiods were recession free. 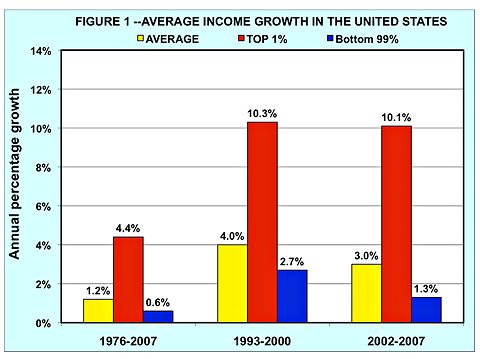 Figure 2 shows the share of total income growth in each time period that was captured by the top 1% of households.  Over the years 1976 to 2007, these households captured 58% of all income generated.  Their share was an astounding 65% in the period 2002 to 2007.

So if an American macroeconomist — a specialist who tends to think of nations as people — or high-level government officials or politicians mimicking a macroeconomist boasted on a television talk show that “average family income grew by 3 percent during 2002-7, more than in most European economies,” about 99 percent of American viewers, reflecting on their own experience, would probably scratch their heads and wonder, “What is this guy talking about?”

As Reinhardt points out: “Other than national pride in league tables, that 1.9 percent average economic growth does not mean much for the experience of the median household in the United States.”

This brings us back to the issue of whether it makes sense to talk in “national” terms, especially given the dominance of the top 1% of households.  According to Anthony Atkinson, Thomas Piketty and Emmanuel Saez:

None of this is to suggest that U.S. society is best understood in terms of a simple division between the top 1% and the bottom 99%; the latter group is far from homogeneous.  Still, this division alone is big enough to establish that talking in simple national terms hides more than it illuminates about the American experience.  Said differently, just because the top 1% of U.S. households have reason to celebrate the U.S. economic model doesn’t mean that the rest of us should join in the celebration.