The Pew Research Center recently surveyed Americans about their views of labor unions and corporations.

Favorable ratings for corporations are no doubt boosted by the steady drumbeat of media celebrations of corporate leaders as American heroes and “job creators.”  Unions, on the other hand, rarely get positive press.  In fact, they are being attacked across most of the country by state legislators eager to curry corporate favor by passing new laws designed to weaken worker and unions rights.  Thus, it seems likely that their growing popularity is the result of a growing awareness that organized resistance is needed to reverse the decline in majority living and working conditions, and that unions are one of the most important instruments to help organize that resistance.

Looking at political party registration shows that “Democrats and Democratic-leaning independents are much more favorable toward labor unions than business corporations, while the inverse is true for Republicans and Republican leaners.” 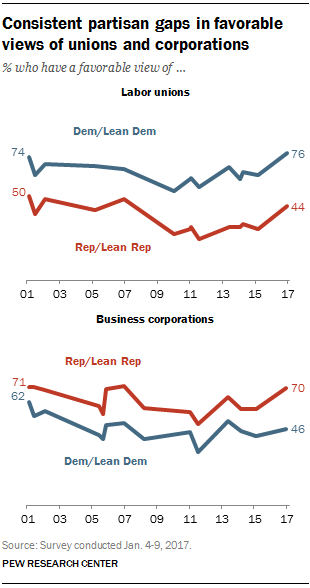 In sum, the Pew survey points to the growth of an increasingly fertile environment for the rebirth of a strong union movement, especially among younger people.