Two of the best-known labor economists in the US,  Lawrence F. Katz and Alan B. Krueger, recently published a study of the rise of so-called alternative work arrangements.

Here is what they found:

The percentage of workers engaged in alternative work arrangements – defined as temporary help agency workers, on-call workers, contract workers, and independent contractors or freelancers – rose from 10.1 percent [of all employed workers] in February 2005 to 15.8 percent in late 2015.

That is a huge jump, especially since the percentage of workers with alternative work arrangements barely budged over the period February 1995 to February 2005; it was only 9.3 in 1995.

But their most startling finding is the following:

Take a moment to let that sink in—and think about what that tells us about the operation of the US economy and the future for working people.  Employment in so-called traditional jobs is actually shrinking. The only types of jobs that have been growing in net terms are ones in which workers have little or no security and minimal social benefits.

Figure 2 from their study shows the percentage of workers in different industries that have alternative employment arrangements.  The share has grown substantially over the last ten years in almost all of them.  In Construction, Professional and Business Services, and Other Services (excluding Public Services) approximately one quarter of all workers are employed using alternative work arrangements. 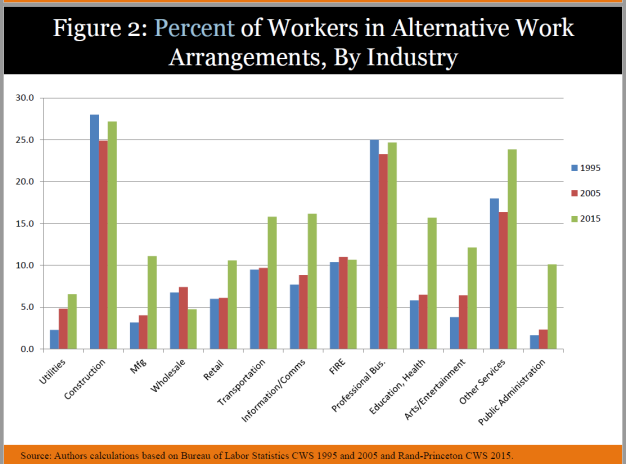 Because the Bureau of Labor Statistics has not updated its Contingent Work Survey (CWS), the authors contracted with the RAND institute to do their own study.  Thus, Rand expanded its own American Life Panel (ALP) surveys in October and November 2015 to include questions similar to those asked in the CWS.   They surveys only collected information about the surveyed individual’s main job.  And, to maintain compatibility with the CWS surveys, day laborers were not included in the results.  Finally, the authors only included information from individuals who had worked in the survey reference week.

People were said to be employed under alternative work arrangements if they were “independent contractors,” “on-call workers,” “temporary help agency workers,” or “workers provided by contract firms.  The authors defined these terms as follows:

“Independent Contractors” are individuals who report they obtain customers on their own to provide a product or service as an independent contractor, independent consultant, or freelance worker. “On-Call Workers” report having certain days or hours in which they are not at work but are on standby until called to work. “Temporary Help Agency Workers” are paid by a temporary help agency. “Workers Provided by Contract Firms” are individuals who worked for a company that contracted out their services during the reference week.

The results in more detail

Table 4 shows the percentage of workers in different categories that are employed for their main job in one of the four nonstandard work arrangements.  The relevant comparisons over time are with the two CPS studies and the Alternative Weighted results from the Rand study. 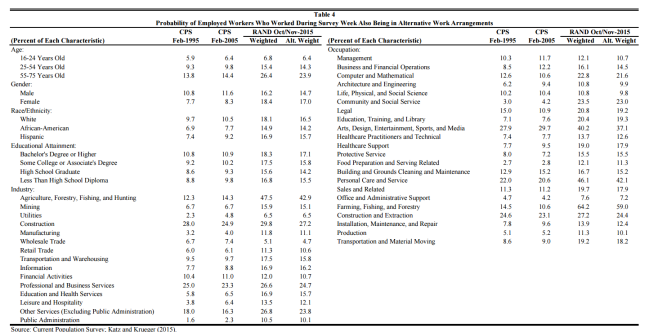 Here are some of the main findings:

The percentage of women with nonstandard work arrangements grew dramatically from 2005 to 2015, from 8.3 percent to 17 percent.  Women are now more likely to be employed under these conditions than men.

Workers in all educational levels experienced a jump in nonstandard work, with the increase greatest for those with a bachelor’s degree or higher.  “Occupational groups experiencing particularly large increases in the nonstandard work from 2005 to 2015 include computer and mathematical, community and social services, education, health care, legal, protective services, personal care, and transportation jobs.”

The take-away is pretty clear.  Corporate profits and income inequality have grown in large part because US firms have successfully taken advantage of the weak state of unions and labor organizing more generally, to transform work relations.  Increasingly workers, regardless of their educational level, find themselves forced to take jobs with few if any benefits and no long-term or ongoing relationship with their employer.  Only a rejuvenated labor movement, one able to build strong democratic unions and press for radically new economic policies will be able to reverse existing trends.

18 thoughts on “The Devastating Transformation Of Work In The US”