There is strong reason to expect a further weakening of global economic activity over the next several years, putting greater pressure on majority living and working conditions.

In brief, Asia’s economic dynamism is ebbing.  Given the region’s centrality in the international economy, this trend is both an indicator of current global economic problems and a predictor of a worsening global situation.

Asia’s central role in the world economy is easily documented.  For example, as the Asian Development Bank points out, “Global headwinds notwithstanding, developing Asia will continue to contribute 60% of world growth.”

Asia’s key position is anchored by China.  China is the single largest contributor to world GDP growth, likely accounting for almost 40 percent of global growth in 2016.  Stephen Roach, former Chairman of Morgan Stanley Asia and the firm’s chief economist, estimates that China’s contribution to global growth was 50 percent larger than the combined contributions of all the advanced capitalist economies.

The rise of Asia, and in particular China, owes much to the actions of transnational corporations and their strategy of creating Asian-centered cross-border production networks or global value chains (GVC).  In the words of the Asian Development Bank, these networks or chains involve “dividing the production of goods and services into linked stages of production scattered across international borders.  While such exchange of inputs is as old as trade itself, rapid growth in the extent and complexity of GVCs since the late 1980s is unprecedented.”

The strategy was initiated by Japanese transnational corporations who began shifting segments of their respective production processes to developing Asian countries in the late 1980s; US and European firms soon followed.  The process kicked into high gear in the mid to late 1990s once China opened up to foreign investment and decided to pursue an export-led growth strategy.

Asia, as a consequence, became transformed into a highly efficient, integrated, regional export machine, with China serving as the region’s final assembly platform.  Developing Asian economies became increasingly organized around the production of manufactures for export; their share of total world manufacturing exports rose from 18.4 percent to 32.5 percent over the period 1992-3 to 2011-12.   And, following the logic of cross border production, a growing share of these exports were parts and components, which were often traded multiple times within the region before arriving in China for final assembly.   Parts and components accounted for more than half of all developing Asian intra-regional manufacturing trade in 2006-7.

China, befitting its regional role, became the first or second largest export market for almost every developing Asian country, with the majority of those exports the parts and components needed for the assembly of advanced electronics.  Between 1995 and 2014, the electronics share of manufacturing exports to China from Korea grew from 8.5 percent to 32.2 percent.  Over the same period, the electronics share from Taiwan exploded from 9.1 percent to 63.7 percent, for Singapore the share grew from 17.5 percent to 36.8 percent, and for the Philippines it rose from 3.4 percent to 78.3 percent.  China’s exports to the region, and especially outside the region, were mostly final goods, with the most technologically advanced assembled/produced under the direction of foreign transnational corporations.  In line with this development, China became the premier location for foreign investment by transnational corporations from Japan, Korea, and Taiwan, as well as leading non-Asian corporations.

This history allows us to appreciate the forces that powered Asia’s growth.  Growing demand for manufactures by consumers and retailers in the US and the Eurozone became increasingly satisfied by exports from Asia.  The production of these exports triggered the production of and trade in parts and components by developing East Asian countries and their final assembly in China, as well as massive investment in new factories and supportive infrastructure, especially in China.  East Asian export production also required significant imports of primary commodities, which were largely purchased from countries in Latin America and Sub Saharan Africa, who experienced their own growth spurt as a result.

As we now well know, this growth was heavily dependent on the borrowing capacity of working people in the advanced capitalist world, especially in the US, whose incomes had been falling in large part because of the shift of production to Asia.  The collapse of the debt-driven US housing bubble in 2008 triggered a major financial crisis and global recession, which also greatly depressed international trade.   A weak international recovery has followed; international trade and growth remain far below pre-crisis levels, raising questions about Asia’s future economic prospects.  To appreciate why I am pessimistic about Asia’s economic future requires us to delve more deeply into the ways in which Asian economies have been restructured by transnational capital’s accumulation dynamics.

The Dynamics of Asia’s Economic Transformation

The three charts below, which come from an article authored by the Monetary Authority of Singapore in collaboration with Associate Professor Davin Chor of the National University of Singapore, provide a useful visualization of the Asian economic transformation described above, in particular, changes in the trading relationships of the countries, with each other and with the rest of the world.  The authors use what they call a measure of “upstreamness” to highlight “where a country fits in the operation of cross border production networks, more particularly whether it specialized in producing raw input, intermediate inputs or finished goods.”  The more a country specializes in producing raw inputs, the greater is the value of its upstreamness index; the more it specializes in producing final goods, the smaller is its upstreamness index.

More precisely: the upstreamness index for an industry takes on values equal to or larger than 1.  A value of 1 means that the industry’s output “is just one stage removed from final demand.” A greater value means that the industry’s output enters the relevant production process as an input that is a number of stages removed from final demand.  Here are some examples of upstreamness values for select US industries:

For the charts below, the upstreamness measure for each country is calculated by weighting the upsteamness of its export industries by the share of each industry in the country’s total exports for the year in question.

As the authors explain:

Charts 2 to 4 depict the changing networks of trade flows between the Asian economies, and in relation to the US, UK, Eurozone (EZ), Australia, as well as the rest of the world (ROW). In these charts, the arrows indicate the direction of the net trade balance between each pair of economies, while the width of each arrow is proportional to the magnitude of this balance.

The arrows are color-coded to reflect the upstreamness of the export flows that move in the same direction as the net trade balance between each pair of nodes. For simplicity, export upstreamness values lying between 1 and 2 are labelled as “downstream” (green), those between 2 and 2.5 as “midstream” (yellow), and those above 2.5 as “upstream” (red).

As we can see in Chart 2, in 1995, a time when cross boarder production networks were still limited, Japan dominated the Asian region.  It was a significant downstream (green) exporter to the US, the Eurozone, the UK, and China.  And it was a significant supplier of key midstream machinery to Korea, Taiwan, Hong Kong, Singapore, Thailand and Malaysia.  It generally purchased its upstream inputs from the ROW.   As we can also see, China was well on its way to becoming a major exporter of final goods to the US, the world’s dominant consumer of both downstream and midstream goods.

By 2005, as illustrated in Chart 3, Japan’s role in the region had dramatically diminished.  China was now the region’s hub, and as such, the dominant exporter of finished goods to the US, the Eurozone, Hong Kong, and the ROW.  The economies of Korea and Taiwan had also been transformed, increasingly oriented to supplying upstream parts and components to China-based exporters.

Chart 4, which captures conditions in 2014, shows a deepening of the trade patterns of the previous period.  China’s export dominance is greater yet, as illustrated by the increase in the width of its green trade arrows pointing to the US, ROW, EZ, and Hong Kong.  The Korean and Taiwanese economies are even more dependent on sales of parts and components to China.  Because of their relatively small trade activity, it is difficult to appreciate the transformations experienced by other Asian countries.  Many ASEAN countries, as noted above, had become suppliers of key electronic components to China.  Vietnam, due in large part to the expansion of South Korean production networks, has become an important assembly and export location for some consumer electronics such as smart phones.

What is also not visible from these charts is the effect that transnational corporate-driven regionalization dynamics have had on the structures and stability of individual countries, and of course on the working and living conditions of Asian workers.  One consequence of the rise of China as the region’s key final assembly and production platform is that leading firms from other Asian countries significantly reduced their domestic investment activity as they located operations in China. This deliberate deindustrialization was a natural outcome of the establishment of cross border production networks which involve, as stated above, the dividing of production activities into segments and the location of one or more of these segments in other countries.

The chart below highlights the dramatic decline in Japanese investment as Japanese firms shifted segments of production overseas.   This ongoing decline in investment is one of the most important reasons for the country’s ongoing economic stagnation. 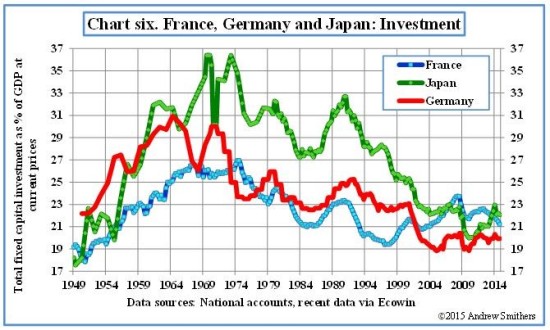 The following chart shows a similar sustained decline in investment, although beginning at a later date than for Japan, for the grouping “Rest of emerging Asia,” which includes Hong Kong, Indonesia, Malaysia, the Philippines, Singapore, South Korea and Thailand.   China, on the other hand, has experienced a dramatic and sustained rise in its investment ratio. Chinese state activity, rather than foreign direct investment, accounts for the great majority of this investment, although in many cases it was undertaken to attract and support foreign production. 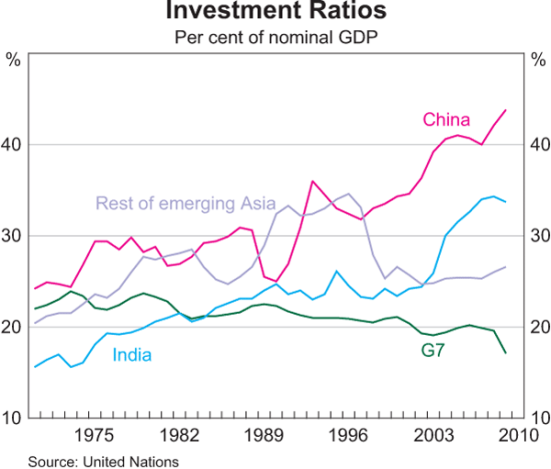 As leading Asian transnational corporations expanded their production networks, their actions tended to restructure their respective home economies in ways that left these economies more unbalanced and crisis prone.  For example, almost all Asian economies became increasingly export dependent at the same time that their exports narrowed to a limited range of parts and components.   And with transnational corporations increasingly able to shift production from one national location to another, China’s pull became ever stronger.  One consequence was that governments throughout Asia were forced to match China’s relatively low labor costs and corporate friendly business environment.  In many cases, they did so by transforming their own labor markets though the introduction of new laws and actions designed to weaken labor rights.  This, in turn, tended to suppress regional purchasing power, thereby reinforcing the region’s export dependence.  Not surprisingly then, the decline in exports that has followed the post 2008 Great Recession poses a serious challenge to Asia’s growth strategy.

According to the Asian Development Bank:

And as the region’s export growth rate declined, so did overall rates of GDP growth, as we see in the table below. 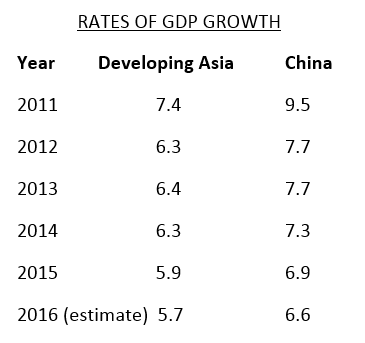 Still, these growth rates remain impressive, especially in light of the steep decline in regional exports.  Perhaps not surprisingly, developing Asia’s buoyancy owes much to China’s ability to maintain its relatively high rates of economic growth.  However, as I will discuss in a following post, contradictions and pressures are mounting in China that will intensify its economic slowdown and significantly depress growth in the rest of Asia, with negative consequences for the rest of the world.